I am loving lampshade making / recovering!

Here’s the original lampshade which I brought off an on-line auction site. I would describe it as a barrel shape frame with a slightly sculpted top and bottom edge.

As this is the first lampshade I have ever made, I carefully unpicked the original fabric layers (and took lots of photos!) so I could remember how it was constructed.

Peeling off the bias binding trim revealed the whip stitched lining and cover.

The stitches were unpicked to remove the lining. 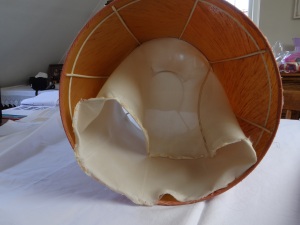 I’m guessing the lampshade was made on a production line as the fabric was simply stuck to the plastic coated frame. The plastic coating is quite damaged in some places which I tried to ignore. Does anyone know how best to “treat” this? Ignore or strip the plastic off and spray the frame – or is there another option?

Finally the lampshade frame could be seen. 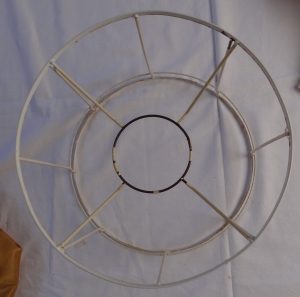 Next came the remake!

As I wanted to up-cycle the lampshade in a traditional way, the top and bottom edges were first bound with fabric seam tape to provide a surface which I could stitch into.

The lining and fabric cover for this lampshade are made in 2 pieces, so once cut the side seams were sewn on the machine.

Do you recognise the fabric? It’s the same as my piped cushions!

By popping the lampshade cover over the frame inside out, I was able to adjust the side seams to make sure the cover fitted well. 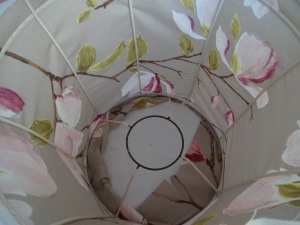 Excess fabric was cut away….

…and then whip stitched into place onto the fabric seam tape.

A similar process was repeated with the lining. Once the side seams were sewn it was stretched into place. 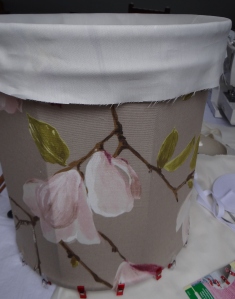 This time with some clips (pegs would work too) as I had enough of pin pricks!

This barrel frame has four arms on the gimbal (that’s the part that attaches to the light fitting), so I undid the side seams a little and made a few extra slits in the lining to allow for the arms.

As I wanted to keep my lampshade plain and simple without trim (which is often used to hide stitching on the outside edge), the fabrics were stitched together on the lining side.

Once the light is turned on, the beauty of the lampshade is revealed.  I love the way you can see the frame shape and how it reflects the delicate Magnolia tree branches. 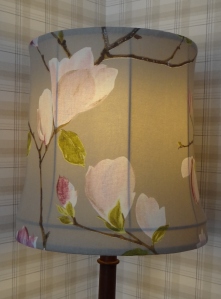 On a health and safety note – I’ve used an energy saving blub in the light as it gives off less heat than a regular one and made sure it doesn’t touch the inside of the shade.

19 thoughts on “How to Recover a Lined Fabric Lampshade”